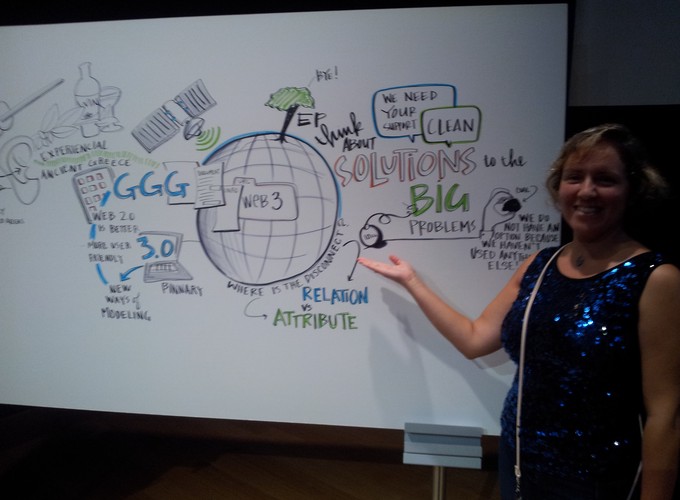 Panajota Kalamari exhibiting a graphical representation of the talk

In the history of human mankind, map has always been of primary importance for any kind of human exploration. From the era of great maritime explorers to the era of brain and genome mapping, cartography has continually changed in order to meet the demands of map users. Nevertheless semantic and concept mapping of data on two or three dimensions has several challenging problems to attack. Naming and complexity of objects on the map, representation of relations, layout and presentation, navigation and editing, are among a few to consider. Despite the difficulties that arise on the visualisation part of information architecture, the central issue lies elsewhere. We argue, that the cornerstone for building the next generation of information systems, including the internet, is a well defined and standardised unit that will be human readable for measurement and exchange of information. The equivalent notion of an information unit for machines is indeed one of the most impressive characteristics of our digital information age and it is based on the power of abstraction we apply to a series of two digits only, 0 and 1, in order to conceptualize visually and aurally human information processing. Files and documents, databases and programming languages, web applications and services, email and digital media, enhance the way we communicate with others. Our perceptibility for the world around us is strengthened.

In computers, information is always encoded in binary data format and it is processed accordingly. But the presentation of information to humans is dependent on the use of it. This becomes most evident when we compare a computer programmer to the end-user of an application or the web. A programmer can read and understand code in many programming languages, he can process the content of a file in many different formats. He uses various forms of symbol representation to manage information and interact with the machine. Indeed, in the history of computer science there are numerous examples of handlers that play such a role, e.g. file and folder referring to data stored permanently, URL addresses referring to web resources, primary and foreign keys referring to tables of data, names for classes of objects and their instances referring to the encapsulated data and methods.

In all cases the common ground for representation of information, the vehicle of information communication, appears to be some symbol, a"sign” according to Peirce theory, that represents the actual thing itself. Fortunately that “sign” has already been modelled in a standard way that of Topic Maps ISO/IEC 13250. Nevertheless what has not been realised so far in computer systems is the concept, i.e. topic, centric use of applications. Within this perspective there is a clear distinction between an existing digitised information resource, e.g. web document, and the abstract notion of a concept, e.g. wikipedia, where the first is linked to the second. Instead of that, proponents of semantic web contemplate linking everything as a resource. As a result we are still revolving around web documents with metadata that describe them. We can escape from this fallacy. Imagine a global network of linked topics and a tour guide from WWW to GGG, from the world of linked documents to the world of linked concepts and subjects. You journey has just begun.

Ignite is a fast-paced geek event started by Brady Forrest, Technology Evangelist for O’Reilly Media, and Bre Pettis of marketbomb.com, formerly of MAKE Magazine. Ignite is a global event, organized by volunteers, where participants are given five minutes to speak about their ideas and personal or professional passions, accompanied by 20 slides. Each slide is displayed for 15 seconds, and slides are automatically advanced. The following presentation is my talk as a pitcher, at the first Ignite event in Athens, Greece.

This is a rehearsal of the talk I gave at Ignite Athens. You may watch it on youtube, or see the slides below for a transcription of my talk. Clicking on the content of any slide you will be transfered at that point in time of the corresponding youtube video