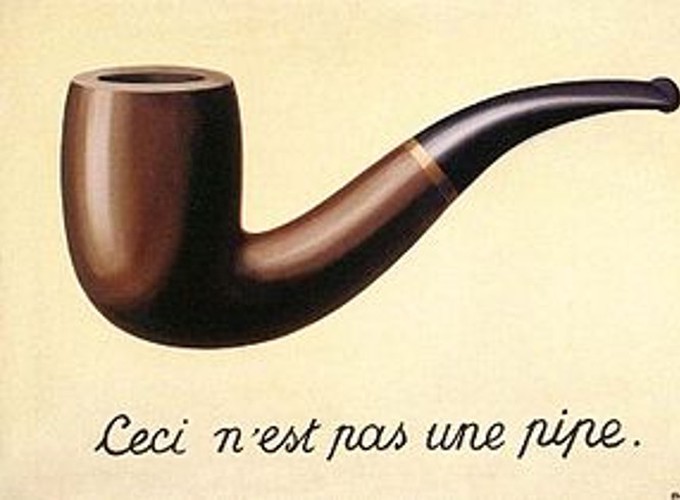 The distinguishing characteristic of these resources is that all of their essential characteristics can be conveyed in a message. We identify this set as information resources 1

Assume we accept this definition for “information resources”. Let us take a real apple. Then we ask ourselves, is that apple an information resource according to the previous definition. In my opinion, the answer is No. Because we cannot convey all the essential characteristics of an apple in a message, even if the message is transmitted through conventional human to human communication channels. If someone has not tasted an apple before then you cannot convey that characteristic in a message. One has to eat the apple to learn about that characteristic and many more.

In addition to that, many will be familiar with pictures like the following one from artist Rene Magritte showing a pipe and underneath a text message in French saying “this is not a pipe”.

Well this is not a pipe indeed, it is an information resource about a pipe. To be more specific this is a visual representation (image encoding) of a pipe. Or you may also say we present graphically, we draw a pipe. It is something that refers to a real pipe, but it is not the pipe. In fact, no matter what is the volume of information you are going to use about a real pipe, you will never manage to convey the true or full meaning of what a pipe is. But enen in the case we approach a very detailed description of something, then the main obstacle is the interpretant and the interpretation of the message.

In a more recent effort of W3C to distinguish between digital information resources and real-world object it uses URIs to identify both of them.

This is part of a bigger problem due to the inherited weak logic, theory and definitions that support RDF data model. The reader can search for many of these discussions that have appeared on the web under the search term “web identity crisis”. I believe the root of the problem lies on the inadequate meaning of word information as it is expressed in English. Linguists are aware of the distinction between signifier and signified and Greek language is serving well that purpose as the word “plērophoria” (signifier) conveys better the meaning of the word “information” (signified).

The ancient Greek word for information is πληροφορία, which transliterates (plērophoria) from πλήρης (plērēs) “fully” and φέρω (phorein) frequentative of (pherein) to carry through. It literally means “bears fully” or “conveys fully”. In modern Greek the word Πληροφορία is still in daily use and has the same meaning as the word information in English. In addition to its primary meaning, the word Πληροφορία as a symbol has deep roots in Aristotle’s semiotic triangle. In this regard it can be interpreted to communicate information to the one decoding that specific type of sign. 3

We propose a new theoretical framework that will cover RDF/OWL and Topic Map data models, the EAV model in RDBMS and the object-attribute-value model in OOP. So far there have been very weak attempts to bridge the gap among the Semantic Web, the Relational Databases world, the Object-Oriented programming community and recently the NoSQL Databases arena. All these need a solid theoretical framework that unifies them and an implementation that exhibits that these technologies are simply different perspectives of the same approach to information representation.