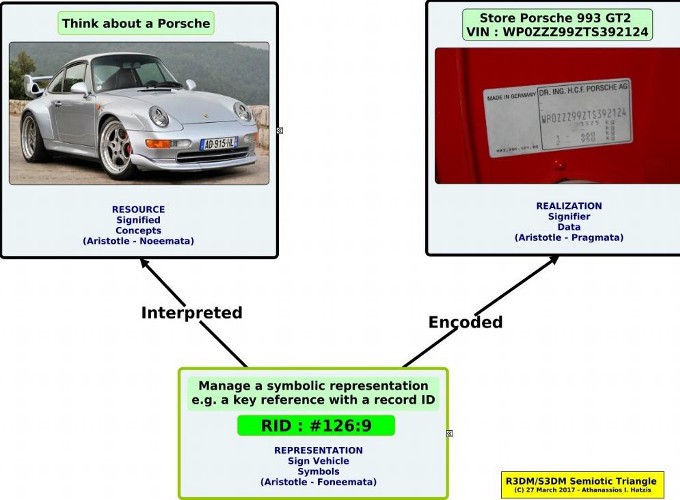 S3DM/R3DM is a conceptual framework that formalizes the architectural design of data modeling process in software engineering. It is founded on the concept of Sign from Ancient to Modern Semiotics. S3DM/R3DM framework is based on the powerful theory of the semiotic triangle, a.k.a triangle of reference. We use numerical vectors (signs), to encode abstract things in our mind (signified) to which the sign refers, e.g. Person, name, Car, model. We associate these with data containers-forms that the sign takes for the storage of data values (signifier), i.e. primitive data types (see wikipedia Signified and Signifier article). This trilateral principle of S3DM/R3DM framework permits a uniform treatment of semantics, syntax and storage of information based on a symbolic representation. Next we define a fundamental, atomic information resource unit, (AIR). Those units, in turn, can be easily shaped to form any tabular, hierarchical, or graph data structure in a unified way. Data granularity can be also deeply connected and related to the definition of a fundamental unit of processing. 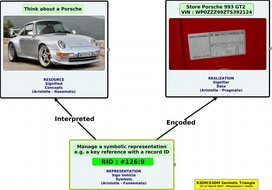 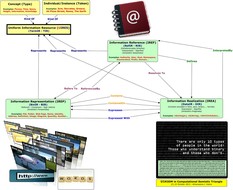 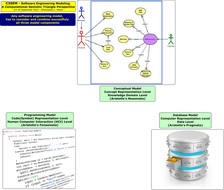 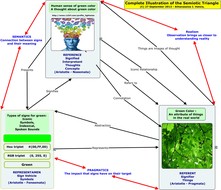 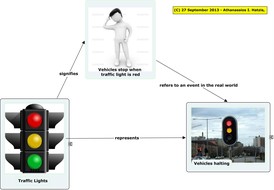 There are two sets of base terms one starting with the letter ‘R’ and the other with the letter ‘S’ that we can use in order to convey the fundamental principles of R3DM. Both of the sets are outlined hierarchically into three levels. Each level is described with one or more characteristic words that are useful for memorizing and recapitulating the distinguishing features of R3DM.

There are also other terms that are often used when we describe relations, operations and features in R3DM these are:

The trilateral schema of relations between R1, R2 and R3 or equally between S1, S2, S3 defines the core mechanism of semiosis. We will use the terms we defined in previous section to build simple sentences that convey the full meaning. We will also use three prepositions “from”, “through” and “in” that accompany RTerms and STerms in a specific order that signifies the left to right direction of abstraction

With the term dogma we want to bring together a set of R3DM principles laid down by an authority as incontrovertibly true. R3DM dogma serves as part of the primary basis of R3DM modelling system, and it cannot be changed or discarded without affecting the very system’s paradigm. R3DM is serving one purpose to become the paradigm of paradigms, the metamodel of metamodels.

There is also a hidden level S0, machine-system level, where everything is encoded and expressed with a sequence of binary digits but this currently out of our scope.

In fact it occurs that this formalization is also the first attempt to formalize the notion of the word “plerophoria”, i.e. information translated in Greek, using Aristotle’s semiotic triangle of meaning.

S3DM/R3DM models any concept C at a highest level, L2, of abstraction.

Information RESOURCES about that concept are REPRESENTED and consequently encoded using a combination of signs S at an intermediate level, L1, into a message M.

Then at the lowest level, L0, the content of M is expressed with a complex data structure D and REALIZED with operations on data containers.

In all L0, L1, L2 levels of abstraction, we maintain REFERENCES for the context (L2), for the construction of signs (L1), and for the addressing of containers and the indexing of content (L0).

Resource, symbol and data, each plays a distinct role but they are united with a trilateral relationship and act as one thing. They are present at every level of R3DM as

In fact you cannot separate these three things in any computer engineering architecture, the signifier (the concept, semantics), the symbol (serialization, syntax), and the signified (storage, data form, i.e. strings, numbers, bits). They stay together from the lowest level of abstraction, to the highest level. You can only link these meaning triangles side by side and move in two directions, specialization or generalization, Sowa Ontology, Metadata, and Semiotics.

There is a duality on the characteristics of a sign. Symbols play two roles at the same time that of a container and content. These roles cannot be separated, they always come in pairs. You may think in terms of how computer memory works to understand this. In digital computers EVERYTHING is represented with a sequence of bits, but this sequence is stored in an array of memory cells. Therefore any such fundamental construct, i.e. data structure, that can be build at a higher level should comply with a symmetrical design, i.e. Types, Instances, Values, and Relations-Associations all of them have to be constructed from these atomic fundamental constructs.

The Threefold Tower of Babel in Information Technology

A concise synopsis of the chaotic situation that is present in information technology is this:

The user is experiencing a threefold Tower of Babel 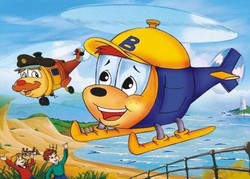 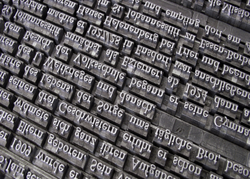 Where is the gap in data modeling ? 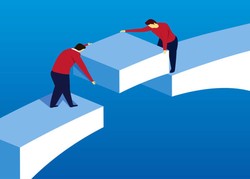 Yet another query language, really ?

Table of Contents Introduction Cross-References Introduction Recently, I have been reading an article for yet another query …
Athanassios I. Hatzis, PhD
2018-04-03 3 min read Semantic_Web 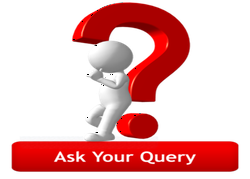 Back to the roots, Relational Data Model 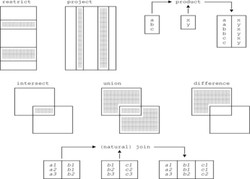 Are our old data model standards out of shape ?

Both Topic Maps and RDF/OWL exhibit signs of aging. These signs do not indicate maturity levels but on the contrary they signal a …
Athanassios I. Hatzis, PhD
2017-07-09 5 min read Semantic_Web 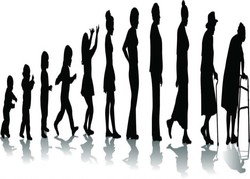 Although there has been significant progress with first and second generation AI systems in reasoning, learning and perceiving, …
Athanassios I. Hatzis, PhD
2017-06-23 2 min read Semantic_Web 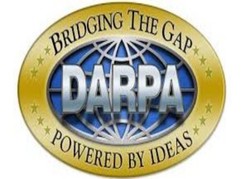 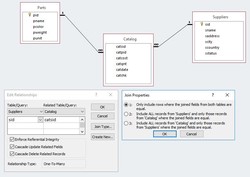 Associative Semiotic Hypergraph based on R3DM/S3DM 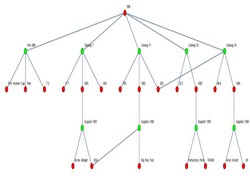 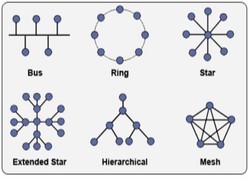 A swift introduction to the key factors that influence the performance and unification character of graph databases
Athanassios I. Hatzis, PhD
2017-02-13 9 min read Semantic_Web 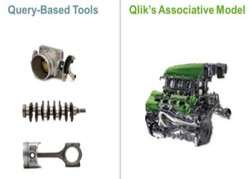 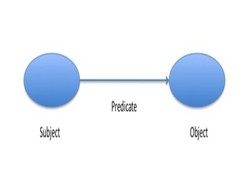 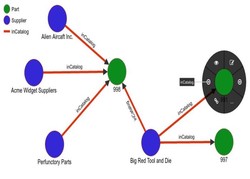 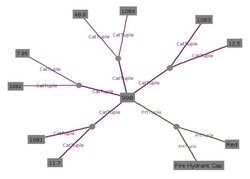 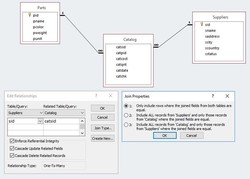 Know-How is How you Know

Table of Contents Introduction The Problem About Knowledge The Know-How is how you know The “I know something or someone” …
Athanassios I. Hatzis, PhD
2016-07-29 6 min read Semantic_Web 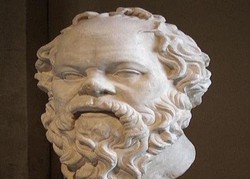 Why Google shuts down Freebase ? 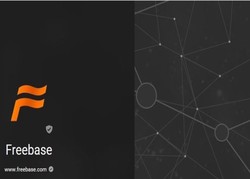 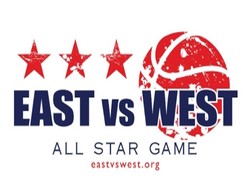 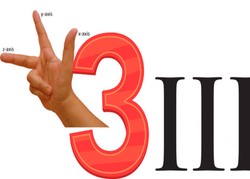 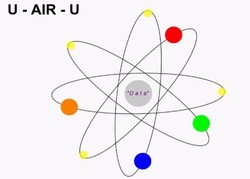 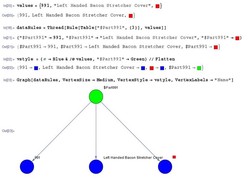 Discussion on the variable-value pair and the identity crisis on the web
Athanassios I. Hatzis, PhD
2013-11-05 10 min read Semantic_Web 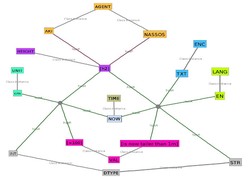 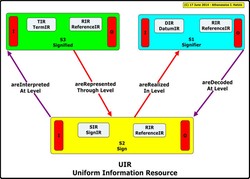 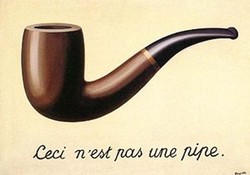